Back to School – A New Principal at CCHS 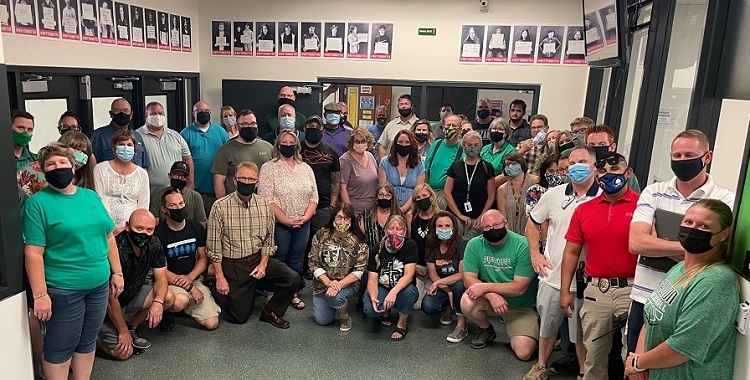 Staff at the Churchill County High Schoo with their new principal

Tim Spencer hit the ground running, taking the reins as principal at Churchill County High School, where he and his staff will focus this year on building communication and culture. Early this summer, while he tied up his duties in Canton, Ohio as the principal of the Compton Learning Center, Spencer utilized technology to meet with his new staff in Fallon. “Before I came here, I met with all the teams, virtually from Canton,” he said. From the office staff to special ed to history and all departments in between, Spencer gathered intel, listening to staff members and building relationships. What he heard was concerning, “poor communication, no direction, we get a bad rap, and some other academic pieces they aren’t believing in,” he said. It gave me a pretty good read, and what that did is created connection and then people would reach out, it’s awesome stuff.”

The school district has been working for the past couple of years to transition instruction to a formal structure called Learner Centered Framework. Spencer met for two days last week with the Implementation Specialists for LCF, “teacher leaders” he called them, to talk about the process of rolling out the program. “We really went through where we’re at and where we want to go, and they pushed,” Spencer said.

He said the teachers worked through several issues, and by the end of the process were grateful for the way Spencer facilitated and let them get to where they wanted to be. “It was really fun to watch, and I appreciated them doing that,” he said. “We are in such a really good spot; the high school could be in a good place going into implementing LCF.” He explained the next steps as dealing with the grading and monitoring of the program. When he called Dr. Summer Stephens, Superintendent, to discuss their progress and what he needed, she stepped in to set that up in the Infinite Campus computer program for teachers to use.

“I’m so blessed and happy to have her,” Spencer said. “I say, ‘can it do this?’ so she’s taking what we want and goes in and creates it. She’s an anomaly, that doesn’t happen.”

While talking to the office staff throughout the past month, the concept grew about improving the culture. “We want to bring back the high school experience,” Spencer said. “Trudy Dahl worked to organize freshmen tours, rallying the clubs and staff, and we had a tremendous turn-out for the tours. We’ve never had that many kids.”

As part of the tours, the ROTC students led parents and students throughout the campus on two different days. Spencer said on the second day, tours ran all the way to 6 p.m. for freshmen and any new students to the district. A tailgate welcome event for students on Thursday night that the staff has planned is building excitement across campus already.

Spencer said he met with the FFA (Future Farmers of America) students this week and had lunch with them. “They made me a basket, it had a hat and jellies and jams,” he said. “One student brought me two big jugs of fresh milk, he milked the cows himself, it was very cool.”

As he works toward the first day of school, building a team with his staff, Spencer said their focus is culture, communication, and academics. “We agreed in that order, if we build this way it will be sustainable,” he said. He has asked his staff to look at what their first 30 days will look like, building plans for 60 days, and 90 days into the school year.

Working from an organizational model called High-Reliability Organizations, he says “staff and students and parents will hear me talk a lot about being reliable because schools and districts are not reliable.” Spencer says there has been a history throughout education of unsuccessful initiatives and programs that damage students, academically and socially. “We are the only big organization that fails all the time and kids continue to suffer,” he said. He pointed to businesses like airports, where there is zero room for error, as an example to follow..

“Those are reliable organizations, if there are things they see, they fix them immediately and that’s what we want to become,” Spencer said. “We want to monitor and access our processes, procedures, and systems and adjust. We’re working on that, and we will continue to work on that for the next few years.” Levels of the plan that Spencer and his staff will work from are first, safe and orderly environments; level two effective instruction in every classroom; level three is guaranteed viable curriculum; level four is standards-referenced; “and number five is what we say we are – competency-based learning. You have to have all these other levels in place.”

Stephens said she is, “really excited about Tim's background and experience he brings to our students and staff – he will definitely help us achieve our strategic goals through his culture-building expertise and background in creating reliable systems.”

One teacher who attended the staff training on Wednesday was equally excited. “What a different atmosphere. We were in the training, and he was just so calm, it wasn’t just theatrics.”

More challenges coming up for October