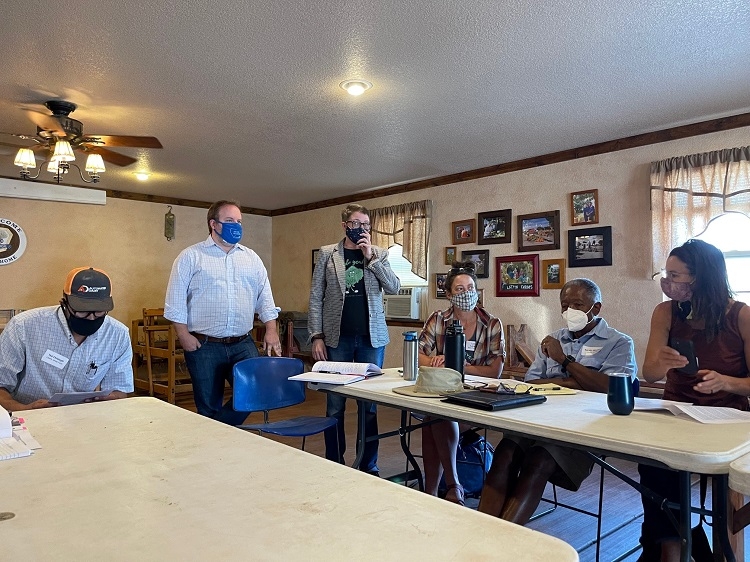 Thanks to COVID and the buckets of relief funding passed out of Congress this year, State of Nevada leaders are in the process of figuring out how to spend $6.7 Billion of the American Rescue Plan funding heading to the state of the nearly $1.9 Trillion in aid passed out of H.R. 1319, earlier this year.

“To scope this for you,” Conine said, “the annual budget of the State of Nevada is $4.2 billion, so about a year and a half of money is coming in from the federal government.”

The ARP money will be allocated through a process that began in April of this year with an eight-page document, Every Nevadan Recovery Framework, explaining the purpose of the funding as well as articulating priorities and strategies that will drive the expenditures and investments.

Conine is part of the 75-day listening tour that launched last week and will continue as Governor Sisolak, cabinet members, and legislators meet with residents in communities across the state to hear their ideas for how the ARP money should be spent.

“The direction with this money is very clear,” Conine said. “We are supposed to fix things. Not make things a little better, but actually take problems off the table.”

According to Conine, during the pandemic there were some of the state programs that just didn’t work.

“When the tide goes out, you can see who’s wearing a swimsuit,” he said. “There were a lot of government systems that just failed Nevadans. We want to fix those.”

Kelli Kelly, Executive Director of the Fallon Food Hub, organized the farmer meeting, saying it was important to hear from young farmers who are just starting their own farms or stepping into leadership roles in the family farms where they grew up, “people who grow food for people… and people who work at the intersection of agriculture and food security.”

Kelly said she is focused, as are the people in the room, on building resiliency into the food system in west-central Nevada.

Several attendees spoke at length about their operations, programs, and the challenges they face with issues as varied as water supplies, infrastructure, housing, and of course, burdensome regulations. Bobby Fagundes is running a 300-acre farm and grew up in the Lahontan Valley on the family goat dairy farm. He is concerned about securing water.

“We have enough water, we just have to be better about how we use it,” he said.

He suggested concrete lining ditches or installing pipe so there were no open-topped ditches, which would prevent evaporation losses and provide for better safety.

Conine asked each attendee to log on to the website that has been set up at nevadarecovers.com, to collect ideas for how the ARP money should be spent. Although the listening tour will provide input from Nevadans across the state, the formal process is in place to provide transparency and gather ideas from everyone possible, not only those who have attended the listening session. Ideas must come through the website to be considered for funding.

He also said the process will continue after the 75-day tour, with approximately the same amount of time to do the work of coordinating with resource experts and put the ideas into a plan.

“We will start bucketing them together in segments,” Conine said. “We will have a conversation about K-12, higher education, businesses, access to capital, food security, housing, etc.”

The idea is to end up with one plan for each issue so there is not a duplication of effort, and nothing gets missed.

“We can talk about how we can build the Nevada we deserve,” he said.

Other ideas discussed during the listening session included addressing the inability to sell food grown on the property and watered from a domestic well, strategizing water use for food production, several food distribution ideas, limitations and frustrations with the Specialty Crop Grant program, the Nevada restrictions on the use of hemp in animal food, on-farm labor shortages, and housing issues, which led to a discussion of developing ag technology to create efficiencies and fill in farm labor.

Also discussed was what Conine called, “the systemic failure” of the state in the federal grant process. He said the grant department at the state level is made up of five positions, filled by two people, one of whom is leaving the department. The grants office is located within the administration department and, “has never really gotten any attention.” There is a move to create the grants office as a cabinet position.

The Nevada Recovers Listening Tour continues this week and for the next roughly 65 days, as the Offices of Governor Steve Sisolak and Treasurer Zach Conine will be holding events throughout Northern Nevada, continuing on the rest of the week in Sparks, Reno, Lovelock, Fallon, Walker River, Hawthorne, and Yerington.

The Citizen Lobbyist -- our civic duty

FY2023 NDAA Passes - With it the NAS Fallon Expansion