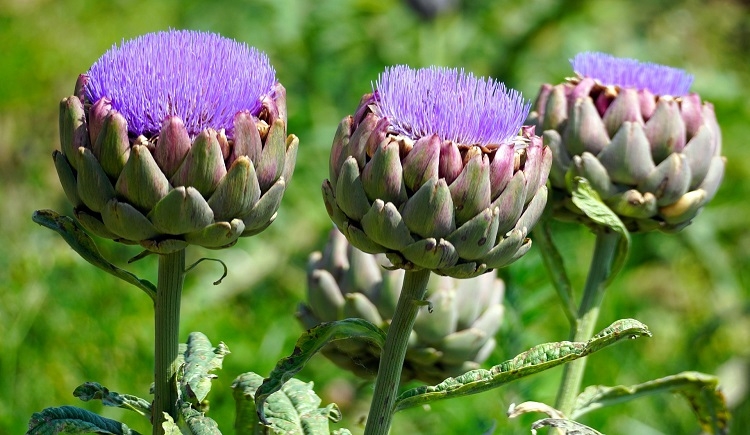 There are a number of delicious ingredients in this vast and sometimes treacherous world that inevitably make me wonder about the first human who thought it would be a good idea to try a bite. Oysters, for example--was the edibility of an oyster born from necessity?  A lone human stranded on a deserted island inspired by hunger pangs to crack open the craggy bi-valves and try their first slimy slurp? And what about artichokes?  Frankly, artichokes look like everything about them is designed to hurt you: the inedible “choke” scratches your throat terribly if you don’t know that it needs to be removed; thorny petals that inevitably pierce your fingertips drawing tiny droplets of blood.  All of these obstacles beg the question: who first decided that the immature blossom of a thistle plant was something that they needed to put in their bellies?  Hail almighty culinary conqueror--without you, we never would have known about the delicious, savory heart that is the reward for bravely facing the artichokes adversity.

I don’t remember the first time I ever ate an artichoke.  I’m certain that I was a very small human and I know that I fell in love.  While they might seem like a daunting ingredient to prepare in your home kitchen, with the right tools and a little know-how, you too can master the mighty artichoke.  My first-grade self wants you to know that it really isn’t that hard and eating artichokes is just about the most fun you will have with any vegetable you might find in your kitchen.

Let’s talk preparation. There’s definitely entry-level artichoke cooking that requires minimal steps of preparation and more advanced level techniques that necessitate a steady hand and a sharp knife. At their simplest, artichokes can be reliably prepared by simply boiling or steaming them. When I eat artichokes, I typically cut off the top third with a serrated knife and trim off the thorns with a set of culinary scissors (the ones stuck in your knife block). I also like to leave at least a portion of the stem attached. The core of the stem has the same delicious flavor and texture as the heart of the artichoke. If you choose to leave your stem intact, make sure you peel away the outer tough layers to get to the lighter-colored core.

If you want to grill your artichokes, I recommend cutting them in half lengthwise before cooking.  Chop off the top third of the artichoke with a serrated knife, then slice the artichoke in half.  Using a melon-baller or an ice cream scoop with a sharp edge, scoop out the spiny-looking choke and discard. Finally, if your recipe calls for fresh artichoke hearts you are in for a little bit more preparation. First, you will want to peel off all of the thick, green, outer leaves (technically they are called bracts) until the lighter yellow leaves are all that remains. Second, either trim off the stem entirely or peel away the thick outer layers until the core is exposed. Next, with your serrated knife, cut off the remaining yellow leaves right above where they meet the heart. At this point, the choke will be exposed and you can scoop it out with a melon-baller or ice-cream scoop. Finally, using a paring knife, clean away any of the remaining green around the base of the artichoke heart and store the hearts until you are ready to cook them in a bowl of cold water with lemon juice.

2 Large artichokes (this recipe can be scaled but be warned, after a whole artichoke you might

be more full than you imagined)

Bring a large pot of salted water to boil.  Squeeze in the juice from one whole lemon and drop in the squeezed halves.

Clean your artichokes for boiling using the method described above.

Boil the artichokes, uncovered, for about half an hour. They are done cooking when the leaves pull out easily and the bottoms are tender when pierced with a knife.

In the meantime, prepare the lemon butter. Gently reduce the lemon juice, salt, and pepper in a small saucepan until about one tablespoon. Over low heat, whisk in the chilled butter pieces, one at a time, until creamy. Remove from heat, and, when ready to serve, whisk in 2-3 tablespoons dribbled hot water to warm.

Serve the artichokes with the butter for dipping, and a large bowl for unused stems. The edible parts of each leaf are nearest their base. Bottom teeth are especially good for scraping off the flesh.

Whisk together all ingredients.

Refrigerate for an hour or so to let the flavors meld together.