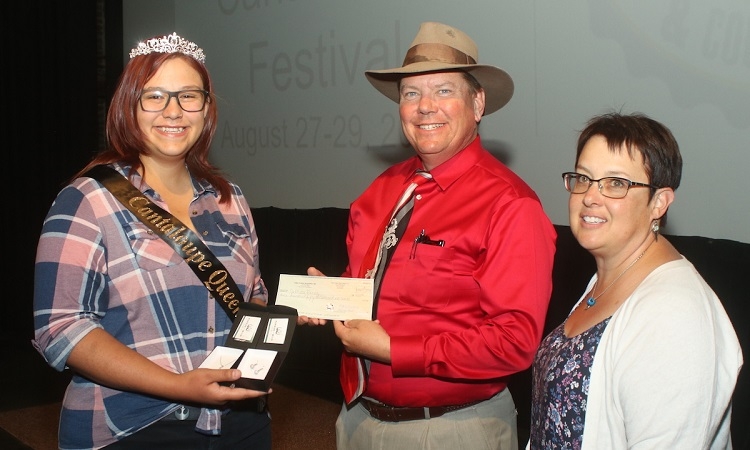 Callista Perez is 19 and a lifelong Fallon girl who just graduated from Oasis Academy with her Associate of Arts degree from WNC. On Friday, June 11, she was crowned the 2021 Queen of the Cantaloupe Festival and County Fair by a panel of judges at the Fallon Theatre. She said, “I'm excited to represent Fallon before heading off to UNR in the fall to continue my education in theater.“On Thursday, June 10, as the captain and first baseman of her State Champion Varsity Softball team, she helped dye the Maine Street fountain blue; the following day she was crowned Cantaloupe Queen.

Further demonstrating her enthusiasm, after being crowned Cantaloupe Queen, she rushed over to the City/County Gym to support the Oasis Academy Varsity Basketball teams in their Battle for the Ore Cart against Coral Academy. The high school season was canceled this year but both programs agreed to continue the rivalry game, which Oasis has won 4 years in a row. The historic downtown Fallon Theatre has been a favorite place for Calli throughout her childhood. In 2015, at the age of 13, the theatre invited her and her fellow cast members to perform a play she directed called, Sleeping Beauty, A Tale Told Slightly Off the Wall. Calli said, “Using the lower theatre and the old vaudeville stage was super exciting and I was grateful for the opportunity to have performed there.”

Calli expressed her heartfelt thanks to those who made the crowning possible, saying, “Thank you to everyone involved, including Kim Klenakis, Zip Upham, Lucy Carnahan, Kelli Kelly, Todd Moretto (Auditory Sensations) for sound, Dr. Jaques with Fallon Family Dental Care for sponsoring, Buttsup Duck Designs for the beautiful sash, and The Fallon Theatre for hosting!”

The Festival this year will be held the weekend of August 27 to 29 at the Churchill County Fairgrounds.

Cantaloupe Festival and County Fair Has a New Director

There's an App for That! -- Cantaloupe Festival

Solving the Parking Problem at the Cantaloupe Festival

Construction won't get in the way of Festival fun.