Talking Cars and Coffee at Telegraph Coffee and Tap 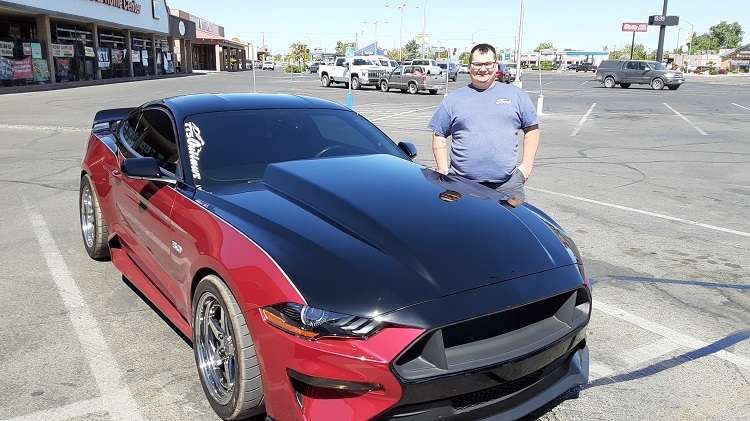 Cars, cars, and more cars, plus goodies and of course, coffee, coffee, coffee. This family-friendly car show event takes place on the second and fourth Saturday of each month this summer, from 9:30 a.m. to 12 noon, in the Telegraph parking lot on West Williams Avenue. The 775 Outlaws Car Club, run by Chris Ghidinelli, and Jerry's Restaurant, partner with the Telegraph to host the event where 40 or 50 cars are on display on any given Saturday. If that doesn't rev your engine, you might be stalling.

The idea started when Ghidinelli called Crystal Bowman, the Telegraph Manager, to ask if they would host a Cars and Coffee meet, and she was immediately on board saying, “Yes, that’s an awesome idea. There is a ton of vehicle enthusiasm in Fallon, and just as many locals with cars they love.” The cars and trucks are from different years, different makes and models, sometimes even motorcycles join in – and anyone who loves their car is welcome to drive up, too.

The first show was held on Saturday, April 3, with three car shows being held at the Telegraph so far. And, talk about revving people's engines - as soon as Bowman started advertising the first event, it went viral on social media with the number of comments zooming at 20 to 40 per post. Bowman said, “The cars are extremely beautiful, and it's just so much fun for everyone. The kids get so excited to see all of the cars, and it becomes fun for everyone in a clean, outdoor location.”

As for experience with the car show circuit, Ghidinelli has driven many car shows in past years, so he knew what avenue he wanted to follow for Fallon, and what he wanted the event to be. He took the wheel and quickly drove the event to the level of popularity it's currently enjoying. In 2018 and 2019, he hosted the Cars in the Park car shows held in Anderson California, and at the Win River Indian Casino in Redding. The club he runs called the 775 Outlaws, has about 30 members that own a variety of cars - American, imports, classics, new and old alike. Ghidinelli himself owns a 2018 Mustang that he bought new and has been enjoying it ever since. He had the paint and body customized by A-1 Body Shop in Sparks and only has 29,000 miles on it so far after owning it for three-plus years.

Ghidinelli has wanted to kick-start the Cars and Coffee event since it was last held in Fallon about three years ago. In addition to current Saturdays in Fallon, the 775 Outlaws zoom in to 76 Gas on East Main Street in Fernley at 6:00 p.m. for their Friday Night Meet each week. On Friday, May 15, the club also cruised out to the Top Gun Drag Strip. Ghidinelli is trying to do a Saturday night car meet in Fallon from 7:00 p.m. until 10:00 or 11:00 p.m. and is looking to add more Saturday morning Cars and Coffee events as well. Telegraph is planning to host the Saturday night events once their expansion is complete and any other Saturday morning events.

When talking about the car shows, Ghidinelli said, “We have Chevy Chevelles, Camaros, T-Buckets, modern cars like his Mustang, modern and classic trucks, Hondas, motorcycles - everyone is welcome to bring their car.” He went on to say, “Just because someone drives a Honda doesn't mean they are not a car person. If you have a car you love, you are a car person.”

Members of the 775 Outlaws hail from Fallon, Fernley, Yerington, Reno, and Carson City. One member from Elko has a right-hand-drive Toyota Starlet, and there are also a couple of members from California. That shows some member dedication to the club when coming out for car meets from so many different locations in Northern Nevada and beyond.

Bowman said, “It's interesting too, depending on when you started driving, that certain cars are nostalgic to you.” Among the members of the 775 Outlaws, there's a car for everyone, and members range in age from 22 up to 70-somethings. “The T-Bucket was definitely the 70-something guy's era,” joked Bowman.

So many people have been reaching out to Bowman to put them in touch with Ghidinelli because they want to be involved and participate in the Cars and Coffee events. Bowman said, “It's great for the community. It's time for us to start getting together to do good, wholesome activities and I'm glad Ghidinelli chose us to be his host.”

Both Bowman and Ghidinelli agree that the primary purpose is to just have fun. They are both looking forward to running more car shows and cruises. Last year's car cruises started at Fernley's 76 Gas. The first one involved 50 to 60 cars that cruised to Walker Lake. “It was like a parade of cars,” Ghidinelli said. The second one cruised from Fernley to an ice cream shoppe near Portola, California and has plans to host more cruises and smaller car shows too.

Telegraph Coffee and Tap is the perfect location and perfect host for the Cars and Coffee event, as far as Ghidinelli is concerned. It has excellent visibility, the show cars can be seen by the passing traffic on Williams Street, the parking is paved, and of course, there's the coffee. Another car show option may be at the Saturday afternoon Green Goddess Farmers Market that runs on the first Saturday of each month where, as it happens, Telegraph roasts their special Fallon coffee blend on-site in the Lariat Courtyard. The Telegraph is also supplying the Fallon Food Hub's Farm Share program with their special Fallon blend of coffee and is planning a Father's Day event for Sunday morning, June 20. More details to follow on their plans for the Dad's Day event.

529 plans: More versatile than ever