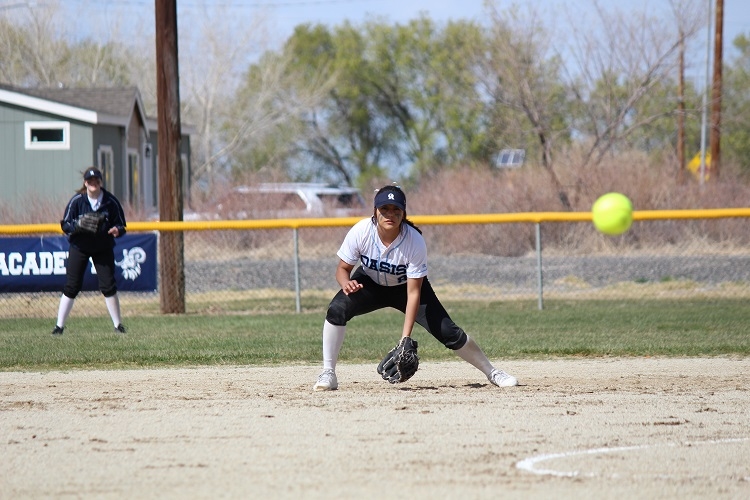 The Oasis Academy Bighorn Softball team takes on Smith Valley at home today at the East Richards ballpark at 4:30 p.m. in a doubleheader which will be the last two games of the season as well as Senior Day.

The small but mighty 11-member team will recognize seniors Emily Payne, Erin Wachsmuth, Callie Perez, Kate Rios, and Emma Robinson who will be honored by their parents and teammates.

Oasis Academy has been undefeated for the past three years, ranked #1 in the 1A Division, and ranked among the top 10 teams in the state along with Reed and Spanish Springs High Schools in Reno – two teams that have dominated softball in Nevada for years.

Emily Payne, a four-year starter for the Oasis Bighorns was named player of the game in the Bighorns sweep of the Mineral County Lady Serpents on May 4. She pitched a perfect game in game one of a 21-0 win in a 3-inning run-rule game. Payne threw 35 pitches, 28 which were strikes, facing the minimum of nine batters striking out six, and went two for three at the plate.

In the second game of the day, Payne followed up with another spectacular 3-inning run-rule game. Payne recorded no hits, no walks, with six strikeouts for a 16-0 shutout. Payne was one out away from having back-to-back perfect games. The only runner was allowed on base from player interference.

Payne is also leading all the pitching stats in the 1A Division. As a 1A team, the Bighorns actually have the opportunity for a full state playoff this year despite COVID regulations that are restricting other divisions. The team is very excited for that opportunity, especially the seniors, and will play on May 20.

Payne could play at the college level but has chosen not to even though college coaches have expressed interest at Showcases during off-season travel ball. She has played for Reno’s Stealth & Batbusters the last several years, but she has chosen to wrap up her softball career her Senior year at Oasis.

She chose Oasis Academy so she could obtain her Associate's Degree upon graduation, which she has done. She plans to go to Boise State to continue her education, and at this point, isn’t planning on playing softball at the college level.

Have Team, Will Travel – With The Force