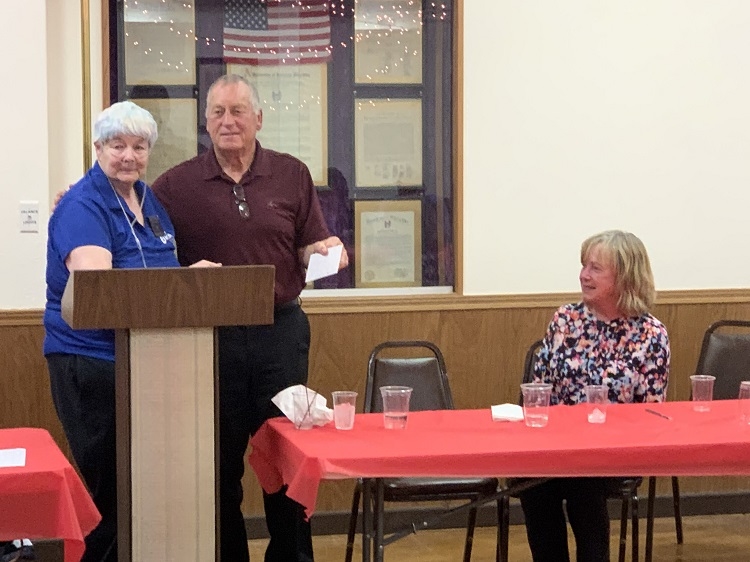 Pat Avery, Exalted Ruler, presents a contribution to Gary Imelli of the Fallon Youth Club, along with his wife, Susan

The Fallon Elks recently held their year-end awards ceremony, making a contribution of $2,500 to the Fallon Youth Club along with recognizing community members, and several of their own members.

Gary Imelli, a founding member of the FYC accepted the contribution, speaking briefly about the club’s latest activities.

When the school district moved out of the old administrative offices at Oats Park, that facility reverted to the City of Fallon and Mayor Tedford suggested moving the Club there. Eventually outgrowing those buildings, the Club received a grant from the William N. Pennington Foundation, and along with contributions from the City of Fallon, Churchill County, and Enel North America, an Italian geothermal company with several facilities in Churchill County, the FYC was able to fund the construction of a huge 15,000 square foot building on Venturacci Lane.

Imelli said “Like everyone else we struggled through this past year. We closed for a while and then when the school district went am/pm we contracted with the district to take the students on the opposite scheduling.”

He said the club is open now in the new building and doubling the number of kids who attend, and the budget will be increasing. “This will really help our budget, thank you.”

Additionally, the Elks made a $2,000 contribution to the Fallon Daily Bread organization, which was unable to send anyone to the dinner.  Also recognized were Officer of the Year Sarena Whisenhunt, Elk of the Year Brad Mora, and the Elks Distinguished Citizenship Award was presented to Rachel Dahl, Publisher of The Fallon Post.