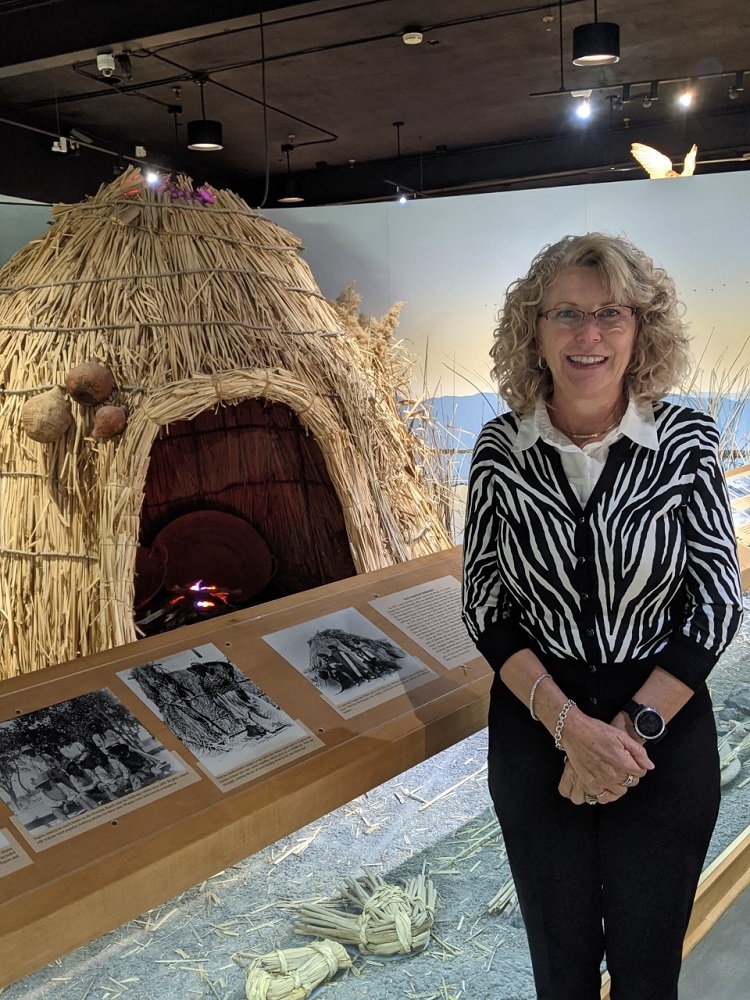 The Churchill County Museum welcomed its new director this week as Teri Hedgpeth settles into her new position with a desire to breathe new life into the museum and take it to the next level.

“I can really affect change here and I was looking for a challenge, so this position was right up my alley,” she said. “There are wonderful collections here with huge potential. The staff is great, and I want to let them run with the exhibits. My job is to support them and release the brakes to let them do what they know how to do.”

Most recently, Hedgpeth served as the Director of Archives and Curator of Collections for the U.S. Olympic & Paralympic Committee from 2012 to 2020. As the historic steward for the United States Olympic History, she also led the building campaign for the Olympic Committee’s new archives, served on multiple committees for the U.S. Olympic & Paralympic Museum, and created Olympic-themed exhibits that traveled across the country.

Which begs the question, why choose Churchill County as her next professional chapter? “My husband and I had moved to Florida for his job, and I was following my hobby of selling vintage artifacts on Etsy, but it wasn’t fulfilling. I found the Churchill County job on a professional website and jumped at the chance to come back out west.”

The position appealed to her not only due to its location but because it was an opportunity to direct both the museum and the archives here in the Lahontan Valley. Even though she had another very highly visible job opportunity, she chose Fallon because she knew she could affect change and make a big difference in a small museum.

County Manager Jim Barbee immediately recognized her as a strong candidate early in the hiring process. “Teri immediately stood out as an outstanding director candidate and we are very fortunate to have landed her skill set and expertise for our county museum.”

Her initial short-term plans including moving exhibits around to bring the Hidden Cave display forward, creating a clear pathway through the museum, and rotating the artifacts, many of which have been on display for decades. “We want to get these artifacts out of the environment and let them rest while bringing new, long-unseen displays forward.” She wants to hang banners on the exterior of the building to help draw people inside.

She has plans to increase the number of patrons, consolidate the archives, dedicate spaces to specific functions, and get the volunteer and docent programs back functioning all to facilitate the visitor’s experience at the Churchill County Museum. One of her goals is to add children’s activities to each exhibit to keep them engaged as they move through the museum.

Hedgpeth will also restart events traditionally held at the museum including the lecture series and has plans to institute a Halloween/ghost walking tour and promote Beatrice Badger’s new book.

The museum is continuing to work with the Bureau of Land Management and the Churchill County Library on the Hidden Cave virtual reality experience and wants to reach out to the Pennington Life Center to draw in the retired community as docents and volunteers within the museum.

Hedgpeth’s passion for preserving and sharing history is backed by more than 20 years of experience in archives, museums, and historic entities. She began her career in public history with the National Archives in Washington, D.C. working there as well as completing their Modern Archives Institute. From there, she became an archivist for the U.S. Navy, then the U.S. Air Forces. She has also served as the director of the Western History Center in Casper, Wyoming using her tools of research in oral history from graduate school to begin the Casper College Oral History Cooperative.

She has two degrees in U.S. history and is currently working on her second master’s degree in Olympic Studies from the German Sport University in Cologne, Germany.

She is a published poet and author with her latest work being “Between a Rock and a Hard Place,” which examined government pressure on the U.S. Olympic Committee in 1980 to boycott the Moscow Olympic Games.

Her passion for sharing history also includes serving as affiliate and adjunct faculty at two colleges in Colorado where she led U.S. history, military history, and immigration history courses.

Hedgpeth was born in California and has lived much of her adult life out west in Idaho, Wyoming, Arizona, Colorado, and Nevada.