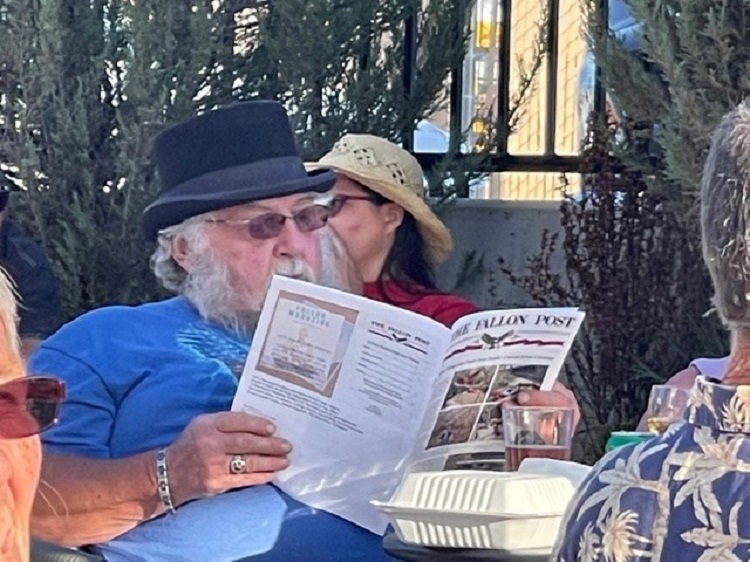 A local reader at the Green Goddess Market

Organizers of the Green Goddess Farmers Market held on Saturday, May 1 at the Oats Park Art Center were excited at the turn-out and the overwhelming support of the community at their inaugural event. The Farmers Market will be held throughout the summer on the first Saturday of each month, running from 3 p.m. to 8 p.m., with the last market being held in September.

Valerie Serpa, Executive Director of the Churchill Arts Council, said, “The attendance has exceeded my expectations quite a bit.” She estimated over 1,000 attendees visited the market during the course of the afternoon and evening. There were 25 vendors in attendance, and more are expected for the June market. Some of the farms that participated were Mewaldt Organics, Fisk Farm Herbs, Lattin Farms, Fallon Food Hub, Two Ravens Farm, Getto Farms, Ames Family Farm, Yellow Petal Flower Farm, and Cherry Dog Orchards. Other vendors included Memoire Boutique with a variety of hats and accessories from their store on display, and Desert Air Jewelry offering their hand-made sterling and stone items for sale.

Jaime Sammons, who developed the Green Goddess idea for the market said, “We are really happy with the attendance and with the number of participating vendors today – and it will only get better as the season progresses.” Sammons and her husband Kevin own Two Ravens Farm, specializing in heritage peppers of all types, and they were offering plenty of starter pepper plants for sale. She expects that the farming vendors will have early produce varieties available for the June market. She is also passionate about Fallon agriculture, feeling that this community should be the center of the farmers market scene due to the extensive agricultural industry.

Doreen Hill, previously the owner of Desert Rose Florist, was asked about having a local flower producer and she responded, “I think it’s amazing. People are so used to the standard flowers and don't realize the higher breeds of flowers that are actually being grown here. I am impressed.” When asked about the Yellow Petal Flower Farm, she said, “That farm is really spectacular. There are many florists in the valley that can be supplied, such as Dandelion Express and Safeway, and other florists beyond Fallon, such as Flowers by Ness in Hawthorne, Twigs in Yerington, Wizards Flower Magic in Lovelock – there are so many market opportunities.” According to Hill, the Williamsons were the first flower farm in Fallon, and they are taking a break from the flower business to do some traveling. She said, “When I owned the shop, I loved being able to just go the farm and look for flowers in season and now we have the Yellow Petal farm providing another series of flower choices.”

The 5 Star Indian Food truck was available, serving a variety of goodies. Crystal Bowman, Manager of the Telegraph Coffee and Tap was roasting a special blend of coffee on-site using a tabletop-sized coffee roaster, sending wafts of freshly roasted coffee through the afternoon air. It was a warm and sunny afternoon with a slight breeze and a constant flow of beverages available to quench the thirst. Two specialty drinks were offered made with a base of Cava, a Spanish “champagne”, and a choice of violet-based liquors. One cocktail was a brilliant pink color made from hand-harvested French violets, and the other, in a purple hue, was an Austrian Creme de Violette. Both cocktails were garnished with Mewaldt-grown lilacs and sweet Woodruff blossoms. A specialty mead was also available from Black Rabbit Meadery in Reno, and a different variety from them will be offered at every market.

The “Will Shamberger Band” (WSB) was onstage in the Lariat Courtyard from 4:00 to 7:00 p.m. playing many of their original songs, rocking the crowd. Even the littlest ones were sitting or dancing in front of the stage - baby groupies, only they don't know it yet. All four band members are Fallon boys, and their music can be found on Spotify, iTunes, Amazon, Facebook, Instagram, and on CD. WSB is also scheduled to perform on Saturday, September 4. The ChArts Store, E. L. Wiegand Gallery, and the Kirk Robertson Gallery were also open from 4:00 to 7:00 p.m. and will be open for each Green Goddess Farmers Market going forward.

The Community-Wide Reunion - Hottest Ticket in Town This Weekend

Fallon Christian
And everyone who does not want to get this vaccine, but is now having it mandated on them, can thank...