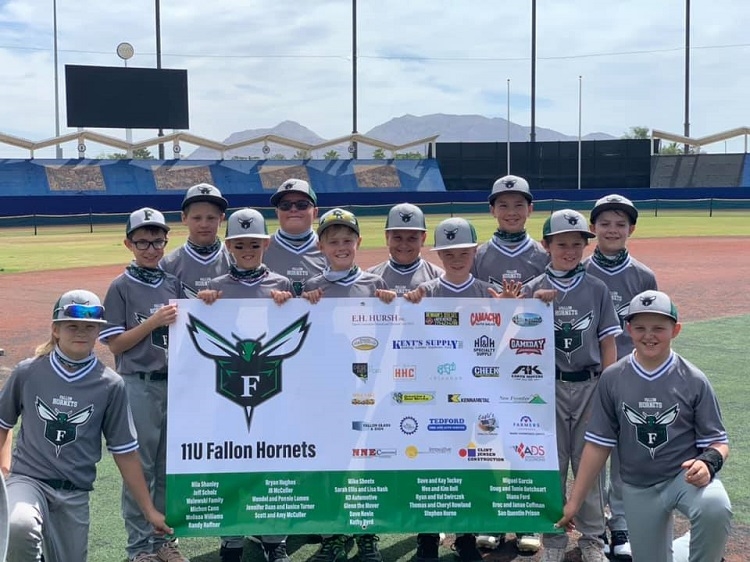 Hornets U11 at Las Vegas Tournament

On April 24, one of Fallon’s favorite youth tournament baseball teams, the Hornets, traveled to Las Vegas to compete with other hard-hitting players. Coached by Brian Byrd, the 11U team scored a big win in the tourney that put them into the “Gold Bracket” – the playoff for the top six teams (check out their video on Facebook). “It was a fun time!,” said Byrd. “We didn’t end up winning the tournament, but we played awesome and got that huge walk-off victory. It really is quite impressive that this little group is able to go to Reno and Vegas and compete with these quality teams who have such deep pools to grab from.” The Fallon Hornets, a local sports team icon, have been around for a long time and is comprised of six different teams, according to Byrd, who says that annually there is a 9, 10, 11, 12, 13, and 14u team - all have been widely supported by the community for years.

In his Facebook post, Coach Byrd wrote that a victory earned by the team goes far beyond runs that can be tabulated on a scoreboard:

“I will forever be grateful to a team of 11-year-old ballplayers, their families, and a community that made all this possible. Today we took 12 small-town baseball players down to Las Vegas and shocked a whole bunch of folks. It wasn’t our win-loss record today that made me most proud. What made today a success was the hustle. The culture. The grit. What made me proud was seeing firsthand what these kids are capable of when preparation meets opportunity.

It was the fact that these kids knew they were underdogs going in and fed off that energy. We love being the underdogs. In the first game of the tournament, we were down 9-6 but continued to chip away, stay positive, and came away with a W.

I hope that when these little dudes face a similar deficit in their real-world problems, they remember the time they were down three runs in Vegas with their buddies and found a way to get back on top.”

Byrd is confident the Hornets will be walking away with a tournament win soon. He also attributes much of the team’s ability to compete as they do to the love and support of their hometown. “If it wasn’t for local businesses, community members, and our friends of baseball stepping up, none of this would have been possible,” wrote Byrd. “From Scotland to Fallon to San Quentin Prison to Reno to Oregon, we had so many folks say 'Hey…I want to help'. Thank You.”“The Fallon community is strong, and this weekend we put in the work to ensure that legacy continues. Below is a group of folks that helped make this possible,” wrote Byrd. “If you see them…thank them. Shop local. Tag them on your social media. Spread the love".