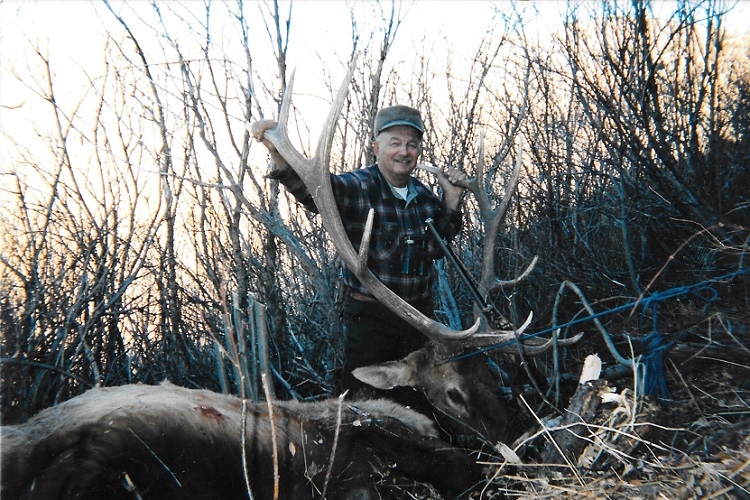 Pete was the first child born to his parents Harold Kjer Olsen and Anna Nevada Olsen. Harold and Anna brought Pete home to the family ranch in Spanish Springs, Nevada, and then at age two, they moved to the home farm in Sparks. While growing up in the hills of Sparks, Pete made many life-long friends; Clifford Block, Doyle Whaley, Jerry Casale, Jake VanMeter, Billy Nelms, and Glen Gibbons to name a few. The boys loved the outdoors, fast cars, and rifles.

As a young man, Pete was active in 4-H, and in the summer of 1951, he asked a pretty girl from Carson City to the dance at 4-H camp. Her name was Ruth Alice Dixon, and they were married three years later, on September 12, 1954.

Pete used to say that young marriage provides adventure and boy did they have many. In 1955, Pete graduated from the University of Nevada Reno with a degree in agriculture. Shortly after college, he was drafted to the U.S. Army where he served two years as a food inspector in Idaho and Utah. The Army expected two could live for the price of one, he always said. Still, the pair did not want for much. (Well, except for a better furnace, considering that once it got so cold in Caldwell the toilet bowl froze!) Pete mowed yards to earn extra money and Ruth worked in a potato plant until Pete Jr., their first son, was born in 1957.

Following his service in the Army, the Olsens moved back to Sparks and began working on the dairy with Pete’s family. In 1959, they welcomed their daughter Karen Ruth into the world and two sons followed: Eric John in 1961 and Neil Edward in 1963.

Pete loved hunting, trapping, farming, racing, and competitive shooting. He instilled a lifelong love of the outdoors, hunting, and camping in his kids and grandkids. He had a particular love for Jarbidge, Nev. Pete’s first love for Jarbidge began in the 1940s when he went deer hunting with the Block family. He and Ruth took many trips to Jarbidge throughout the years and in 1969 they purchased a cabin in town. They called it their Valhalla, and over the years they passed their love for the small canyon town to their family.

Pete also loved to hunt in Northern Washoe County, specifically, a place he called Sam’s Cabin and another spot the family calls Antelope Camp. He also loved to shoot chukar. He and his chukar hunting buddy Roger Mills made many a day trips to hunt the birds. The chukar were generally safe, and the pair often came home with stories of bent drivelines and lost heaters to make up for the lack of birds.

In 1972, Pete and Ruth moved their family to Fallon, Nev. and started the dairy where their sons farm now. He loved the valley and while he would often reminisce about Sparks in “the old days,” he was confident in their decision to move. Despite the long hours required to make the dairy go, Pete loved the work and over time he, Ruth, and even the kids began settling into the Lahontan Valley. Pete was a member of a card club, a car club, and his beloved coffee crew. He had coffee with his friends at 6 a.m. and 3 p.m. every day he could make it for 40 years, including the week he died. At coffee, they’d swap stories, trade gossip, talk about the weather, their grandkids, and occasionally discuss farming. He was a friend to many.

Pete was a 4-H leader, a member of the Danish lodge, and a lifelong member of the Lutheran Church. Above all, he was a cherished husband, father, grandfather, great-grandfather, brother, and uncle. Pete was the anchor of his family—ever-present and unwaveringly faithful—quietly loving his rather large and rather loud gang.

Pete was the best of men. There is no doubt that when he reached the gates of heaven—wearing a pearl snap shirt, a worn pair of jeans, and his Red Wing boots—the Lord greeted him and said: “Well done; good and faithful servant.”

Pete was preceded in death by his parents Harold and Anna Olsen, two brothers who died as infants, his brother John Olsen, and his nieces Linda Olsen and Joyce Olsen.

Pete’s funeral will be held on Thursday, April 29 at 1 p.m. at St. John’s Lutheran Church. A celebration of life will be held at the Fallon Convention Center on Thursday, April 29 at 3:30 p.m. Services are being arranged by the Gardens Funeral Home. In lieu of flowers, donations can be made to St. John’s Lutheran Church, Churchill County 4-H, or the FFA programs.

Linda Gomes 2021-04-26, 09:07 AM Our love and prayers to the whole family.
I knew Ruth and Pete from my days working at the Spudnut shop. Their family was young then. I always enjoyed talking with them. As their travel agent in later years I learned how much their family meant to them. Such a legacy left behind.
Hugs to Ruth💞