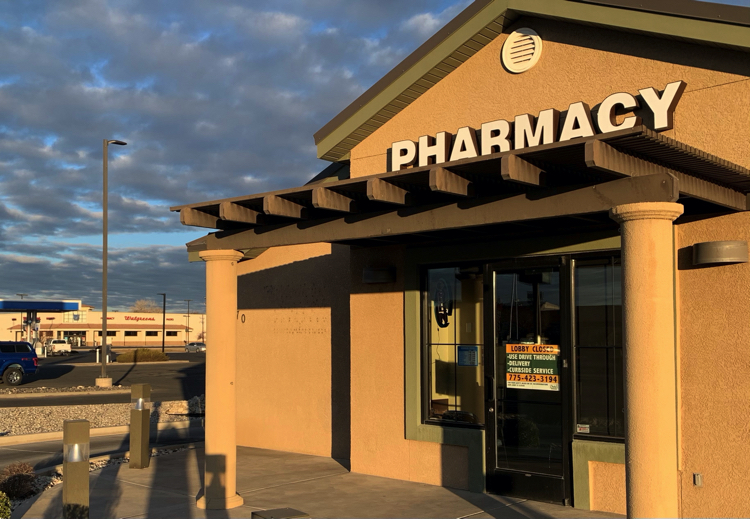 100 years of service comes to a close

Dahl’s Pharmacy, which has operated as an independent pharmacy in Fallon for 100 years, is closing the doors on the business this week.

Nathan Dahl, owner and pharmacist, is selling the pharmacy to the Walgreen’s corporation, and said inventory teams were at the Fallon and Fernley locations late this week to transition the store to Walgreen’s ownership. Dahl is closing the three retail locations of the pharmacy in Carson City, Fernley, and the Fallon store.

“It’s heartbreaking,” he said, “we are so grateful for all this community has done for us over the years.”

According to Dahl, the sale was supposed to close last week, but was hung up with paperwork, leaving local patrons in limbo and worried. “We are all so very upset,” wrote one customer in an email to The Fallon Post, “that was our only good pharmacy.”

Another wrote saying, “What are we going to do - that was the only independent pharmacy, we are being forced into the chains.”

Dahl has worked with his employees to make sure they are taken care of and moved into other positions. “It has been amazing to see how it has worked out, pretty much everyone has found more flexible or higher paying jobs and they are excited for their new challenges.”

Dahl said the decision to sell and close the retail shops has been difficult. “This community is one of the most loyal, devoted communities for small business that I know of,” he said, “they are loyal to the core, the problem that we have is the employers of the majority of the people in this community have chosen health care plans that are absolutely destroying independent pharmacy.”

He explained “We are doing more prescriptions in our pharmacy than we ever have and we’re losing money every month because I don’t have any control whatsoever on what I get paid for any medication that I sell; it is 100% up to the insurance companies, and I have absolutely zero control with regards to an insurance claim with what they are willing to pay.”

“The analogy I use,” said Dahl, “is I want to walk into a Chevy dealership and pick out the nicest corvette they have sitting on the lot and I want to tell them that I’m going to pay them $5,000 below cost and I’m going to drive it off the lot and they have to do that, that is literally what I do every day.”

He explains that insurance companies have raised premiums to the point most Americans can’t pay, and to save even more money the companies are cutting what they pay to providers including pharmacists and doctors. “It’s not just us, There are no private practice doctors left in Fallon because insurance companies refuse to reimburse an affordable amount for these businesses to stay functioning.”

According to Dahl, the pharmacy gets paid by the insurance company less than the cost of the drug to begin with. Although the issue is complex, he explained one aspect of the business being the Direct and Indirect renumeration fees (DIR). While the pharmacy pays the wholesaler every two weeks, the insurance companies can take up to 45 days to send reimbursement. However, after the insurance company pays, they review all the claims billed to them during quarterly audits, and take back, based on standards set by the federal government that they do not always follow, money they had previously paid.

Another issue Dahl explains has to do with PBMs, (Pharmacy Benefit Managers), which are third-party managers of insurance benefits between insurance companies and pharmacies. For instance, “CVS is both the payor and the payee, they own one of the largest PBMs in the country, they know exactly what they are doing, when all the little guys are gone, they will be the only one and then they can pay themselves whatever they want.”

CVS is listed as one of the top three PBMs in the country, which together make up 78% of the market and cover 180 million enrollees. In 2017, the largest PBMs had higher revenue than the largest pharmaceutical manufacturers, according to a paper by Kevin Richman, “The Evolving Pharmaceutical Benefits Market,” (2018).

Dahl said he along with other independent pharmacists went before the Supreme Court in October of last year, to support a lawsuit brought by the state of Arkansas against the PBMs saying the DIR fees are illegal. He said, “the PBMs are saying states have no right to say what they do, because during the Bush administration a law was passed making anything medical a federal issue, not a state issue.”

The matter is before the Supreme Court with a decision expected to address the question “do the states even have a right to say how health care is run in their state,” said Dahl.

In spite of efforts by the independent pharmacists, and his determination to provide pharmacy services to the community, Dahl says it’s too late for them to hang on. “This pharmacy has been an independent pharmacy here in Fallon, this is its 100th year,” he said. “It’s been in Katie’s (his wife Katie Tucker) family for 50 of those 100 years, our hearts are broken for the community, for the loss of small business, for the loss of the backbone of America; it is not sustainable for small business to survive in this country anymore.”

Nathan will continue practicing compounding in a closed-door pharmacy, providing services online at Dahlspharmacy.com where he does specialty packaging, services to institutions, and assisted living facilities. “This is an area of pharmacy that the chains nor the insurance companies don’t want any part of,” he said, “it allows us to operate independently and provide the highest level of service we hold ourselves to.”

As the doors of a Fallon institution close this week, Nathan said, “We just want to make sure that everyone knows we have dearly loved serving the community,” he said.

Disclosure: Nathan Dahl is one of 38 cousins in the family of The Fallon Post publisher, Rachel Dahl

Consider these types of tax-smart contributions

Watch out for Tax Scammers