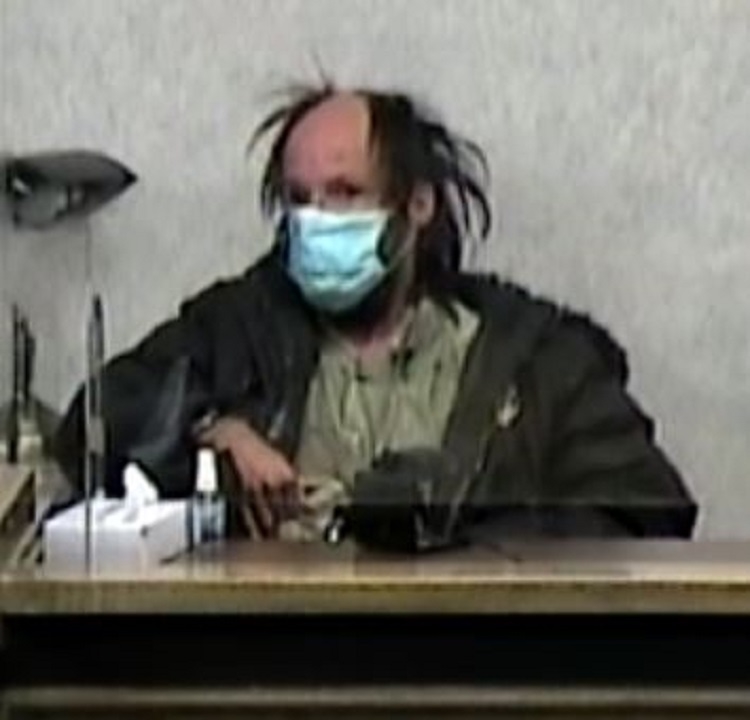 Because court is being held virtually due to COVID, photo quality over the computer is very poor - Will Jensen gives his witness statement.

After many months, Andrew Ryan Crutcher appeared for sentencing on his assault of Fallon man, Will Jensen. While under the influence of methamphetamines, Crutcher violently beat Jensen, who is disabled and has had Cerebral Palsy since birth. The assault took place at the Fair Grounds on April 4th when Crutcher beat Jensen and left him for dead in a bathroom stall after attempting to rob him.

The charges against Crutcher include robbery against a vulnerable person, a Category B felony, and attempting to commit a bomb threat, a Category C felony, which was a separate event taking place on March 23rd.

According to DA Lane Mills, on April 4th, Crutcher used force or violence to take possessions from a disabled person, beating and bloodying him, handcuffing him, and ultimately leaving him in a bathroom stall at the Fairgrounds for dead. The victim, Will Jensen, was hospitalized for his injuries then spent nearly a month in a skilled nursing facility for rehabilitation. Mills provided photographs of the significant trauma sustained by Jensen during the attack to Judge Stockard as well as to Crutcher. In his arguments, Mills asked for the maximum penalty under law.

Jacob Sommer, the Churchill County Public Defender representing Crutcher, argued for leniency in sentencing based on Crutcher’s age (19), the fact that he has no prior felony convictions, and that he was introduced to methamphetamines by his family at a very young age and currently has a severe drug problem. During his arraignment in September, Crutcher stated, “I was on dope when I was doing all of this. I need help and I need it bad.” He offered an apology to the court and to Jensen for his actions.

The victim, William Jensen, was present in the courtroom to provide victim impact testimony. “I felt unsafe, I still feel unsafe,” Jensen stated. “I was severely beaten – beat in the chest and the eye - I had a broken face and was in a state of shock. I was unable to fight him off.” He went on to say, “It felt like recovery would take forever, but now I feel strong.” Additionally, Jensen reported that he still owes the nursing facility $15,520 for medical expenses and is unable to pay.

After providing his testimony, Jensen stated, “I am willing to accept your apology.” He then addressed Crutcher directly, “I hope you understand what you have done and I hope you have the courage to be a better person - I say this as your brother. I hope you get some help.”

Judge Stockard stated that he carefully considered Crutcher's age and lack of criminal history and while the sentences are lengthy, those factors kept him from imposing the maximums. Crutcher was sentenced to 6 –15 years on the robbery charge. By statute, because the victim was deemed a vulnerable person, the sentence was enhanced by 2-10 years (with the maximum enhancement carrying 6-15 years). For the charge of threatening to use a bomb on another individual’s residence, Crutcher received 19-48 months. The sentences are to run consecutively with 221 days credit for time served.

Stanley B 2020-11-17, 10:01 AM Aren’t there any victim funds available or any medical charities in Churchill County that could help him pay that medical bill?

Notes from the District Court