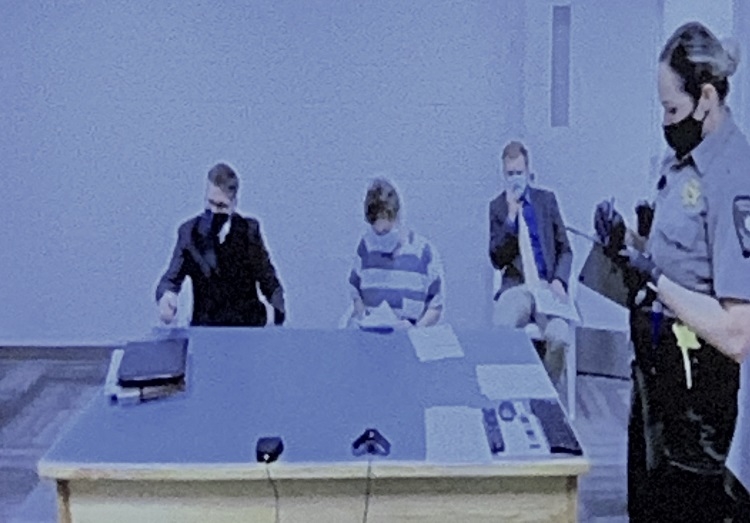 Ofelia Murillo appears in Justice Court with Jacob Summer. Due to COVID, hearings are held virtually, resulting in poor photo quality over a computer screen.

Ofelia Murillo, age 55, currently in the custody of the Churchill County Jail, was arraigned in Justice Court on first-degree murder charges on Monday, November 9th. She was also arraigned on several other criminal charges relating to the shooting death of her ex-husband, Caesar Alvarado Jauregui, age 38.

The allegations list several charges, including murder in the first degree – defined as a deliberate and premeditated killing, which is a category A felony punishable by death. If there are mitigating factors, the sentence could be reduced to 50 years to life in prison without the possibility of parole.

Charge (2) states the alleged use of a deadly weapon in the commission of a crime, specifically a 9 mm handgun. In Nevada, this is a sentence enhancement that can double a criminal sentence adding 1-20 years in prison.

Charge (3) states Murillo is allegedly a principal to the commission of a felony, by direct or indirect involvement of the crime (aiding, abetting, hiring, encouraging, etc.)

Charge (4) states that Murillo allegedly committed criminal conspiracy in which she conspired with one or more persons to commit a crime. Due to the nature of the underlying charges, this is considered a class B felony.

Charge (5) states that she allegedly destroyed evidence to conceal the commission of a crime, to obstruct the law, or to prevent the production of the evidence.

Charge (6) states that Murillo was allegedly driving without a valid driver's license.

According to Chief Deputy District Attorney Lane Mills, Murillo conspired with Fabian Abello to lie in wait for Caesar Alvarado Jauregui and kill him. Jauregui was shot several times with a 9mm handgun around 3:30 AM on September 25th at his home on Sprig Lane.

Mills stated that Murillo dropped Abello off at the train tracks at Roberson Lane and later picked him up when the deed was done. Neighbors reported seeing a vehicle parked near Jauregui 's home at the time the shots were fired. Another witness told law enforcement that after leaving the scene, the vehicle ran a nearby stop sign. Murillo later admitted that she was the driver of that vehicle.

The Deputy District Attorney also stated that the day after the killing, Murillo stole Jauregui’s vehicle and fled to Mexico with Abello. According to Mills, there are photographs of Murillo and Abello crossing the US-Mexico border. Jauregui 's vehicle has not been located, but it is suspected that it is in California or Mexico. In an interview with the Sheriff’s office, Murillo denied involvement in the crime, however, she admitted to owning a 9mm handgun. According to Mills, the handgun is currently missing.

Jacob Sommer, Churchill County Public Defender, was present during the arraignment. Although not acting as her attorney of record, he addressed Murillo’s custodial status and requested a release on her own recognizance (OR). “She is entitled to the presumption of innocence,” Sommer stated, "she has a 22-year history in the community, she owns a home here and has family in the area. Additionally, she has no criminal history, has never failed to appear in court, and there is no indication of substance abuse.

Mills argued against an OR and bail for Murillo. “The facts are strong in this case – there is clear and convincing evidence that she is a flight risk.” He also cited the Nevada statute that states that all persons arrested on charges other than murder in the first degree may be admitted to bail.

Judge Trotter denied both requests, however, reduced bail from one million dollars to $500,000. Trotter later explained that he carefully considered Murillo’s longevity in the community and potential flight risk when making his decision to reduce her bail. He also explained that while Nevada law does allow for no bail for the open murder charge Murrillo is facing, the Nevada Supreme Court ruled that the state must provide evidence and justification for bail, or in this case, no bail. The Court ruling also specified that if bail is set, it must be reasonably achievable for the Defendant. Should Murillo post bail, she is prohibited from leaving the state.

Another issue arose during the proceedings regarding legal representation for Murillo as her charge is a capital crime in which the death penalty may be sought or imposed. According to Nevada Supreme Court Ruling 250, capital defendants must retain or be appointed a qualified attorney who has previously acted as defense co-counsel in one death penalty trial tried to completion.

According to Mills, no determination has been made as to whether the state is pursuing the death penalty. Additionally, qualified legal counsel must be appointed at the first hearing. Technically, Murillo is not currently represented. She waived her right to a preliminary hearing within 15 days to allow her daughter to meet with a potential defense attorney next week.

The court will proceed to secure a qualified attorney who is willing to take the case if Murillo is unable to retain one. A status hearing was set for Monday, November 16th.

Churchill SO Takes the "Battle of the Badges"

Restrictions now to include locations in addition to hospitals