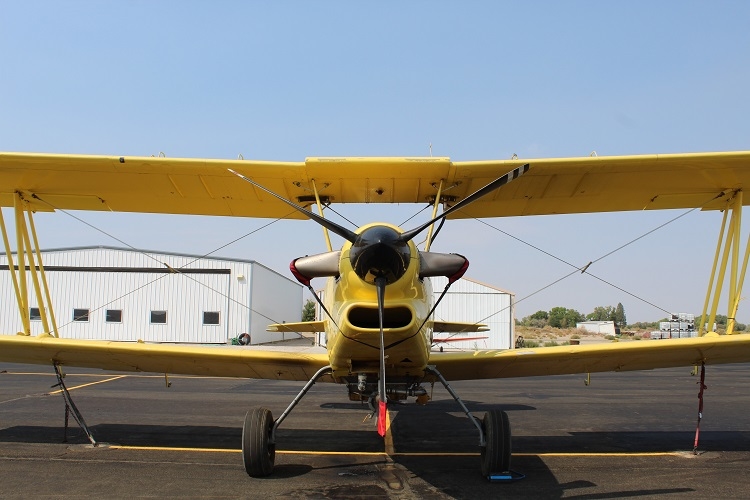 In a small corner off the road to Lovelock, near the local cemetery, racetrack, and dog pound is the Fallon Municipal Airport.

Although established on this ground in the 1950s, the airport has experienced many changes in last ten years. By 2013, the airport had become part of the airspace designated by the State of Nevada, specifically for Unmanned Aerial Systems and is used for testing, education, research, and manufacturing for the drone industry.

And while that high technology is happening at the airport, Fallon Airmotive is training future pilots, Silver Sage Aviation carries workers from Dixie Valley and back, Frey Spray is laying crop dusting the community’s fields, and Ugalde Aviation is fixing every plane in the region.

It is a small chunk of the community that tends to be forgotten or overlooked, but it is home to five small businesses and many other frequent fliers.

By April 2020, the coronavirus pandemic shut down the entire world for the first month, and small businesses suffered. The Department of Transportation awarded states with CARES Act funding to keep airports of all shapes and sizes running and alive. In Nevada, the large airports like Reno-Tahoe International Airport received funds, along with smaller airports like Silver Springs and Fallon, which received $30,000.

The City of Fallon is the owner of the airport, leasing up to 60 hangars to both many pilots. However, the field is never bustling or packed. The question: Why do they need money?

According to the Department of Transportation, the $30,000 CARES Act funding was aid for, “support continuing operations and replacing lost revenue resulting from the sharp decline in passenger traffic and other airport business due to COVID-19. The funds are available for airport capital expenditures, airport operating expenses, and airport debt payments.”

In Fallon’s case, the City of Fallon was required to fund 6.25% of two projects funded mainly by the Federal Aviation Administration, which were under the Rehabilitate Airport Pavements Project. The city’s 6.25% was paid with CARES Act aid, rather than saved funds, allowing for more money to be saved for the future.

With an airport as small as ours, what kind of passenger traffic and airport business could we possibly have?

The five businesses mentioned above rely on the airport being open and busy. When COVID restrictions prevented travel out of state, fewer pilots purchased fuel and other necessities from Fallon Airmotive. When the essential workers needed to be at the Dixie Valley Caithness Geothermal Plant, Silver Sage Aviation had to be there to charter. Without those flying and using their planes, Ugalde Aviation would not have business either.

Just like other small businesses that were impacted by COVID, many pilots who keep their planes in Fallon use them to travel to sites of employment, and other business dealings. The Fallon Municipal Airport is a tool for those businesses and must be maintained to keep business open. It is an essential piece of community infrastructure that is tucked away in the backyard sand of Fallon.

The author of this piece, Viviane Ugalde, is the daughter of Chester Ugalde who owns Ugalde Aviation.

I grew up in the airport. I rode a bike up and down the tarmac in the summers. I sorted – what seemed like – bottomless buckets of nuts, bolts, and washers for my dad. My brother and I washed planes for an extra dollar. I grew up in a community within a community. A small group of people who rely on the infrastructure of the airport to do their jobs. Without support economically, and from the community, when they bring their machines to local shops, the airport would be an extremely different environment. It may be hidden, fenced off, and full of tin buildings... but the Fallon Municipal Airport is essential to a section of the Fallon community, and deserves as much love as the local restaurants, theaters, grocery stores, and small-town boutiques. --Viviane