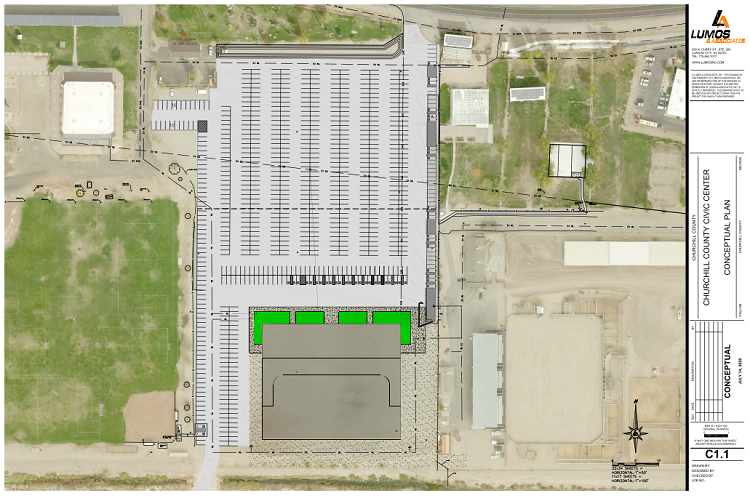 A rendering of the proposed Civic Center that would be located at the Churchill County Fair Grounds
In an effort to expend CARES Act dollars, the idea of a Civic Center at the Fairgrounds is being explored

The Churchill County Fairgrounds have been a backbone of the Fallon community even since the early days when the fairgrounds were located in the middle of town, near where the old Walmart building is today. The scene of rodeos, the Cantaloupe Festival, 4-H classes, and mud bogs, the fairgrounds is one of the places where our community has come together and thrived.

For much of the past 20 years, local leaders and elected officials have seen a need for the addition of an event center – similar to the one Humboldt County built in Winnemucca. As a result of the Covid pandemic, they may finally get their wish.

Last week at the County Commission meeting, Commissioners approved preliminary plans for a new Civic Center, using money received from the CARES Act.  County Manager Jim Barbee addressed commissioners and explained the need to build the new facility to meet the needs of the community created by the pandemic.

According to Barbee, Health officials at the state level expressed to county representatives at a recent Nevada Association of Counties meeting, that the focus they would like to see counties take in expending CARE funds is to support ongoing testing and childcare to ensure the workforce can continue to work. Especially in light of changes school districts are making to limit the number of students on campus at any one time when they open for classes this year. “Health officials at the state level are saying that they expect the pandemic to continue for the next couple of years, dependent on the availability of a vaccine,” he said.

At the time of the commission meeting last week, both Oasis Academy and the Churchill County School District were working on return to school plans that required younger students to attend school in person every day, but the older student body would only be on campus half the time, whether that is half-days or an A/B block schedule. Half of their students would be working on school remotely at any one time.

“We definitely see that there’s going to be some need to address for those folks who are working, the need for childcare in a more substantial way than we previously have,” said Barbee. He also said DETR (Department of Employment, Training, and Rehabilitation) has announced that they will have grants directly for parents to offset childcare costs so they can maintain their workforce status.

In addition to the need for childcare, Barbee discussed the need to continue community-based testing for the virus and talked about the current program they are running, testing people outdoors at the fairgrounds. So far, the county has tested over 3,500 people and they are continuing to see an increase in the total number of people coming to the fair grounds to get tested weekly.  “It has been very challenging on our staff and our health professionals to test in the open-air facilities due to the heat and the wind,” he said. “It is also challenging to find health care workers to do that work.”

The significant impact it has on our community by maintaining the surveillance is noteworthy — Barbee says that the 1.1% positivity rate helps keep Churchill County open and is a result of the number of tests administered, weighed against the number of positive cases. Some communities have had to pull back their opening due to an increase in their rate of positivity. “Churchill County was not one of those communities because we were able to show a lower rate of positive tests due to the volume of community testing, we have provided,” he said.

The building would also give the county the capacity to respond to Covid-19 on multiple levels. The 75,000 square feet building would provide multiple configurations to address sheltering, testing, and day care needs, as well as temporary public medical facilities to increase the community treatment capacity if needed. Over 30,000 square feet would be utilized for distance learning through the county CARES program for students who are not on campus at school. Barbee said through county staff, they would utilize high school students to tutor younger students in their assignments. “We would also partner with the school district to have distance learning instructors at each grade level and believe with proper social distancing we could accommodate over 750 students across all grades.” The other 45,000 square feet would be used to maintain indoor recreation throughout the remainder of the day. The facility could also accommodate five lanes of drive thru Covid testing while reducing stress on health care workers.

The facility would also be available to address other potential community emergencies such as the incidents that have happened in the past, train wrecks, earthquakes, and flood.

According to Barbee, the county has submitted a generally high-level spending proposal to the state for the use of the CARES funds of $2,970,142. Roughly $1 million would be used for previously accumulated costs such as tracing, testing equipment, and business grants. The remaining $2 million would be utilized for this project if the proposal is approved at the state. The first half of the CARES money is required to be expended by September 30th of this year.

“These are very rough numbers and would have to be improved through the process as we move through architecture and design,” said Barbee. The projected cost of the project is $6.1 million for the new Civic Center. “We would be looking at other ways to identify how we would pay the remainder if the project that we submitted would be approved by the state to move forward.”

Commission Chairman Pete Olsen said he supported the project at this point, although he was hesitant to rush a decision this big. “Because of the time crunch, we’re rushing more than we would like to but we have several more opportunities before we really start spending money.”

Commissioner Scharmann asked if Barbee had talked with the City and if they “were in favor of this and willing to work with us on this?”

Barbee said he had met with the city and reviewed the general plan. “They are supportive of the general concept and the idea and they are continuing to look at their resources to identify if they are able to be a partner on it with us,” said Barbee. He said the City has received nearly $1.6 million in CARES Act money from the State.

Commissioners will meet in an emergency meeting this morning, Friday July 24th at 11:00 a.m. to discuss this issue further including specifically the agenda items listed as:

The meeting will be held at the Churchill County administration building, 155 N. Taylor Street.

If you enjoy The Fallon Post, please support our effort to provide local, independent news and make a contribution today. Your contribution makes possible this online news source for all things Fallon.

JT Schmidt 2020-07-27, 09:49 AM What is the proposed timeline for this building. Is CARES ACT $$$ the right fit? If a vaccine is developed, the crisis could be on it's way to being quelled by the time the building is finished. However, what if the CARES ACT $$$ is needed for emergency funding for our County's families?

Rae S. 2020-07-28, 08:10 AM From what I understand, it seems like they *have* to use the money for building things because that's how the CARES act was written. It also needs to be completed by December. They can't just create a fund to, say, help pay for rent or groceries. Honestly, I think it's kind of silly too. Contact your federal reps and tell them what to change for the next act!