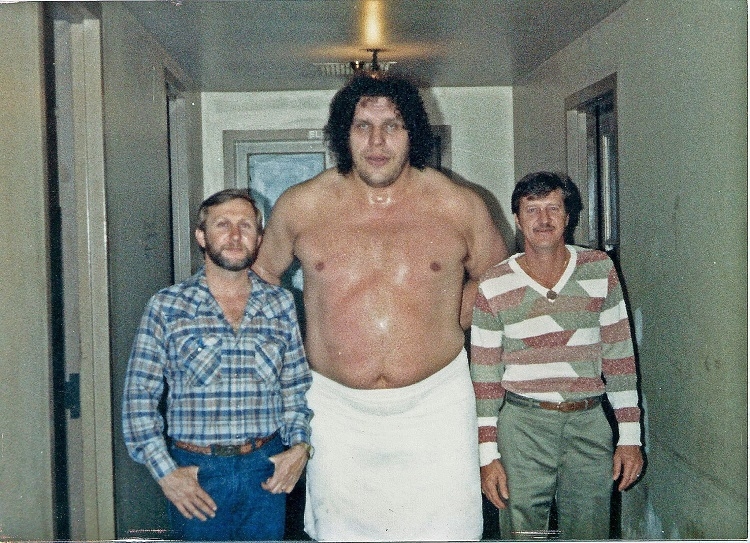 The photo that hung in his office of Dr. Ridenour with Andre the Giant
Longtime Fallon Physician, Gary Ridenour died today at home

According to his wife, Debbie, Dr. Gary Ridenour passed away today, “suddenly at home.”

In 2013 he wrote a book called, Pandemic, in which he examined the effects of the avian flu. He regularly appeared on talk radio shows, discussing the issue of worldwide pandemics. Early in his career he served as the doctor for wrestler Andre the Giant, and always had a photo of them in his doctor office.

Ridenour had been arrested in June of 2020 on charges of open and gross lewdness, battery, and preventing or dissuading a witness from testifying. He had been released on his own recognizance and was not in custody.

Federal Drug Enforcement Administration agents searched the home and office of Ridenour in February of 2019, serving search warrants as part of Operation Hypocritical Oath, a sweeping investigation covering California, Nevada, and Hawaii regarding opioid abuse and the over-prescription of prescription drugs.

In July of 2013, Dr. Ridenour was found guilty in District Court of weapons charges and ordered to perform 100 hours of community service. In June of 1994, his medical license was revoked by the Nevada Board of Medical Examiners.

However, under a stay, he was placed on probation for five years and ordered to complete a prescribing course, complete a six-month course in medical ethics, perform 40 hours of drug abuse public service, not prescribe Schedule I, II, and III drugs, and submit to the Board a monthly log of all Schedule IV and V controlled substances he prescribes. He was also ordered to submit to random samplings of body fluids collected by the Board, reimburse the Board the costs of the investigation and prosecution, pay a $1,000 fine, and receive a public written reprimand.

Over the years, Ridenour had built a loyal following of patients who defended him and the care he provided. Several of his patients have expressed their gratitude, crediting him with saving their life and providing dedicated old-fashioned care, occasionally even making house calls.

His wife Debbie said today that she is grateful to everyone who has expressed concerns, and the family asks that their privacy is respected at this time.

For the last 15 years the US Government DOJ and DEA has relentlessly attacked and targeted doctors for prescribing palliative care to human beings. The DOJ had failed to control a street narcotic crisis ans instead has wrongly blamed doctors like this extraordinary human being.

This doctor was not only a victim of the misplaced war against pain patients and doctors who treat incurable diseases but he was also the target of a complex campaign to silence voices who spoke out against harmful medical practices as he did in his book “Pandemic” and his work on Gaia network:

This doctor will go down in history as a hero and a martyr to the cause of helping humanity and Individual patients at the ultimate cost to himself.

History will not be kind to those who have abused their positions of power in effort to silent the truth this doctor and humanitarian was trying to share.

The TIDE Coalition has been working to stand up for doctors who prescribe palliative care for the terminally Ill Disabled and Elderly and advocate lawmakers to stop the DOJ discrimination against doctors scripting palliative care. We also speak out against these crimes against humanity being inflicted by a misplaced war on prescribed palliative care.

We honor Dr. Gary Ridenour and the extraordinary work he was trying to bring to light on infectious disease.

Phil Lind 2020-07-23, 06:43 PM Hey Jj, how many lives have you saved? How many people do you help daily? How many people have u impacted and left a lasting impression in their lives? How many decades have you devoted to helping others and your community? Im willing to bet your answer to all of those questions is NONE! Thats why your to spineless to put your whole name with what you say so who are you to say that man wasnt a doctor!? Exactly.....your nobody

Susie 2020-09-13, 11:38 AM YUP, because I've witnessed Gary fire clients who tried to abuse HIM to get pain meds they didn't need. So surely this is one of those former patients. Miss you already, Gary.

Tasia Ratti 2020-07-22, 11:22 PM Really guys?????? Come on now??? This write up was done because not only did the community lose a long time resident, but also a doctor, friend, father, husband, grandfather, great grandfather, etc. I feel that it’s not only rude but completely unnecessary to bring up the criminal history considering the circumstances. I’m not surprised though, this is just how the professionals in Fallon NV operate!!!! So Bravo Fallon Post, way to be disrespectful and careless!!!!!! Oh, one last thing, at least if you’re going to “kick someone while they’re down” get some new information at least and stop repeating what we all already know! My deepest sympathy goes out to docs family, they are good people!!!

Jesse gilbert 2020-07-22, 09:35 PM The man just past away and I think you guys got a lot of nerve talking about anything negative. That has nothing to do with anything. He has family so show them some respect and leave the negative crap out. He was a good man and he had a wonderful family. It’s a sad day due to his loss and he will always be remember for the good he did helping people who were sick. Rest In Peace DOC

Kateri and Kyle Cramer 2020-07-22, 08:55 PM We are very sad to hear of Dr. Ridenour passing.
He was a kind man. He took care of my husband and myself as children. Then took care of our children when they got sick. He will be missed.
Love and Condolences to the family.
Kateri, Kyle Cramer