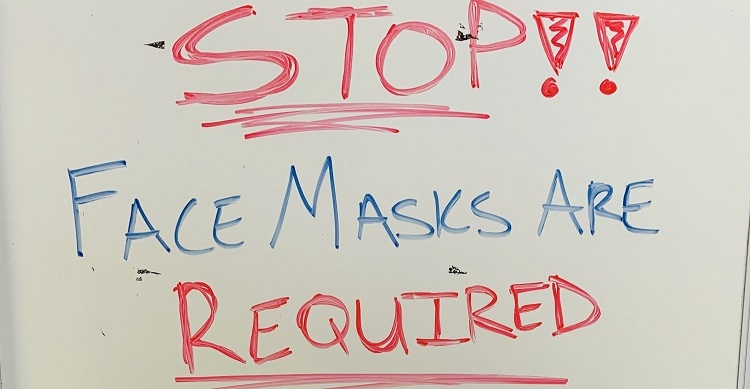 Local businesses are facing tough times as a result of the COVID pandemic. Restaurants, bars, gyms, retailers, salons, hardware stores, ranch suppliers – you name it, everyone is being affected. In addition to social distance requirements, merchants now must also comply with mask mandates. For many it has not been easy and in the back of everyone's mind is the possibility of another complete shutdown. The consequences resulting from policies intended to keep us from getting sick are killing local business and stand to cost people their jobs.

Big R started requiring masks to be worn as soon as the mandate was issued, but that didn’t keep OSHA from their doorstep. Big R received an unannounced inspection by OSHA last week and according to assistant manager Cody Woods, they could face a penalty of at least $10,000 per unmasked employee or customer. Fines could also be issued if an individual’s mask is not completely covering both the nose and mouth. “We were also told that customers with medical conditions don’t have to wear masks." They were also told that homeless customers were exempt from the requirement.  “Are we supposed to ask if they are homeless" asked Woods, "and couldn't that be considered demeaning to some?" OSHA provided no further information on the exemption.

Like most other businesses in town, the mask ordinance is taking a financial toll on Big R. “If a customer refuses to wear a mask, they aren’t allowed to come in,” Woods stated, "and some customers simply won’t shop here right now." Keeping staff onboard is of foremost concern, but they also have an essential business to keep open. “Going forward, if we don’t have the business, we can’t have the people," Woods admitted.

Frontier Liquor and Sporting Goods recently received a letter from OSHA advising them that they had been reported for non-compliance. Owner Kevin Weishaupt explained that he had not required employees or customers to wear masks prior to OHSA's notice. He was required to investigate the complaint internally and reply or be fined. “We’ve moved to a different country,” Weishaupt stated, “this is communism.” One of his primary concerns is safety, specifically how dangerous it is for someone to carrying a concealed firearm to be wearing a mask – a common occurrence in any store selling firearms.

Although OSHA’s letter stated “this is not a citation or notification of proposed penalty,” Weishaupt risked more action by OSHA if he failed to comply with what the letter referred to as “The Act”. However, no specific act or legislation was cited in the text. He now has some customers leave when they see the mask requirement at the door. “I’m frustrated,” Weishaupt said. “I think if you are that worried or have an underlying condition, it is your responsibility to stay home and not enter the store.”

According to Misty Mulholland, general manager of Fitness for Ten, traffic has been drastically reduced now that masks are required in fitness centers. While masks don’t have to be worn during “vigorous exercise” they must be worn between machines and throughout the gym. This has not been easy to enforce, but they haven’t had a choice. “We are a small family-owned business,” explained Mulholland, “and we can’t afford the fines.”

During the early days of the mask mandate, Mulholland had to post a message on social media asking members not to take their irritation out on the staff. Unfortunately, employees are tasked with having to police members and remind them to put or keep their masks on. “For the most part, everyone is really good now,” Mulholland explained, but frustrations are running high for all concerned.

Several members have canceled their memberships and many are simply not coming back in until the mandate is lifted. Another upsetting possibility for Fitness for Ten is also staff cutbacks, according to Mulholland. While they are managing to stay open for now, a future shut down would put most likely result in reductions in force.

Anna’s Café is also struggling under the weight of the mandate. Not only is the requirement for staff to wear masks challenging, but they are also supposed to police patrons entering and exiting the premise. Owner Ana Hardy expressed her frustrations, explaining that some of her employees have heat rashes, cooks are struggling to work in masks over hot cooktops, and waitresses struggle when the pace is vigorous. But the frustration doesn’t stop there. “How are we supposed to deal with things like upset customers?" asks Hardy. “We don’t even know exactly what the mandate requires. How can they fine me when they haven’t properly trained me?”

Social distancing isn’t helping make up for lost business either. Ana’s sales are down from having to keep tables six feet apart and serving at half capacity. Despite the setback, she remains grateful. “I’m glad we made it this far,” says Hardy, “I have really wonderful customers – some come in buy a meal when they aren’t hungry, others come every day without fail, and I’ve even had donations just to help keep us open.” Hardy has yet to cut back on staff, but with no sign of the restrictions being lifted, it may be something she will have to consider down the road.

In some places, this kind of bad-to-worse scenario is phrased as being struck by lightning while being bit by a snake. Most local merchants would not disagree.

Stanley B 2020-08-03, 06:31 PM The Governor just announced another problem for businesses not enforcing mask wearing by employees and patrons- you will be wide open to frivolous lawsuits filed by parties claiming your business caused their illness. He said only businesses following the mask mandate and other safeguards will be protected from lawsuits by new legislation just signed. At this point you would be stupid to leave your business wide open to that.

Savannah fischer 2020-08-03, 11:52 AM I am getting so sick and tired of people saying things like if I am afraid of getting sick than stay home! This is just crap why don’t the people who don’t want to wear a mask stay home! Just do what you have to do for man kind and suck it up! Yes I have breathing problems , but I still wear mine , and if it wasn’t for the fact that I have to go out in public I wouldn’t but life goes on and I have to, but I also do what I have to do to survive and protect the ones I love, and others, I am human! And as for people who have a business and afraid they might have to shut down? I hope it doesn’t come to that,but you have to know having a business is risky, you take risks, and god for bid that doesn’t happen,but people who don’t give a shit about man kind or any thing or anyone are the ones who are going to put you out of business because they don’t want to do the right thing buy wearing a mask for a little while! Why do you want to cater to those kinds of people? There are more people who are willing to wear it than not! Those should be the ones you should want in your store, we want you to thrive and not want you to get a Hugh fine that will possibly close you store, the ones who don’t wear it don’t care!! Those are the ones who fefuse to wear one and are taking tissy fits about it because they only care about them selfs!!!

Stanley B 2020-08-01, 08:30 AM Unfortunately when a state of emergency is declared they can force you to do things (like when they put a curfew in effect during a natural disaster). I personally hate wearing a mask, especially in this heat, but I do wear one in order to keep businesses here from being cited, fined, or even closed. At this point it is futile to argue the usefulness of this mandate because it is in effect and it has real consequences for businesses who cannot afford those consequences. I wear the mask, despite my discomfort or personal thoughts, just to not be the person who gets a business in trouble with OSHA. Once you are on their radar, you can be certain there will be unannounced visits and further actions. None of this should be a surprise because we were all warned well ahead of the enforcement phase. If people get testy about wearing a mask, ask them if they have a $135,000 cashier's check in their pocket to cover the potential max fine or if they are prepared to pay you for lost revenue and pay your employees if you are shut down for a period of time. That's reality until the mask mandate is lifted, no arguing your way out of it.

Shawn 2020-07-16, 09:45 PM Sorry but if you don't fight this being a business then why should we fight for you by shoping there. I have walked out of stores that require a mask for a flu that has a 98% survival rate. You business need to go talk with sissylac and tell him he won't have any taxes or a state at all if all the business are all closed. I wilk be shopping on line till this mask crap stops.

MA Nelson 2020-07-16, 09:02 AM Businesses can claim their employees said they have medical conditions so they are not required to wear a mask. Same goes for their customers. OSHA cannot ask because of the HIPPA privacy act. Orher businesses around the country are stating they will NOT pay any fines. Its a matter of using the mandates own clause of medical conditions being exempt and private to get around this stupid mandate.

Rhonda Bills 2020-07-18, 05:44 PM Where do you find creditable, official information about medical conditions that exempt mask wearing? According to the ADA, no such exemption exists. Thanks for telling us where the you find such info.

Carl S. 2020-07-16, 08:49 AM It feels like this is being framed as "government is crushing small business" and not the fact that customers are refusing to do something as simple and easy as wear a mask. If you have a tshirt or a bandana at home its easy to make one. It shouldn't be a political statement to take care of yourself and others!

CLR 2020-07-18, 03:45 PM It's a FACT that masks cannot stop a virus and only can protect others if you are coughing or sneezing. So, why doesn't everyone wear a mask all of the time during flu season? It's not about a virus, it's about CONTROL, period.

aph 2020-07-16, 02:11 PM It is a fact that illegal "mandates" are crushing small businesses. Wear your ask i you wish... leave everyone else alone to live their lives. This is called freedom, liberty and personal rights. If you are afraid...stay home.

How Can You Help Lower Your Longevity Risk?