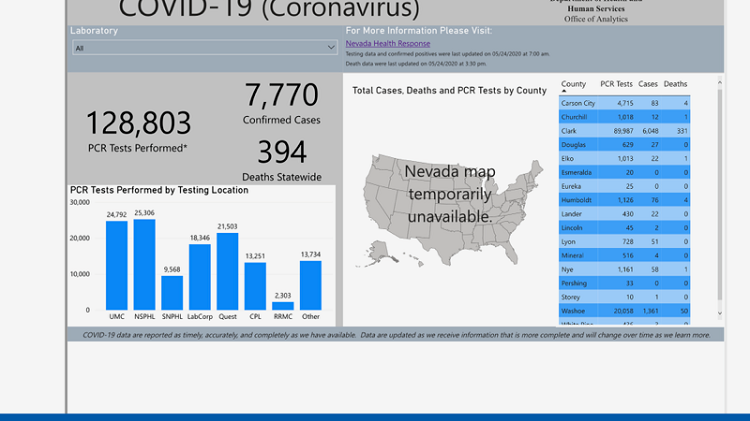 County Manager Jim Barbee has been working with the Nevada Division of Public and Behavioral Health for the past ten weeks trying to get accurate testing data to no avail. To say he is frustrated would be the understatement of this pandemic. Barbee is working on this Memorial Day instead of spending time with his family, doggedly trying to get answers, and get accurate data reflected on the state dashboard.

Instead of getting testing data from the state like other rural communities, Churchill County has had to individually gather their own data directly from the various community organizations performing COVID-19 tests. Churchill County test results include tests done by Banner Churchill Community Hospital, Narag Fallon Family Clinic, NAS Fallon, and the Fallon Paiute Shoshone Tribe. Any tests performed at the Fallon Renown clinic are sent to Reno, and then reported to the Washoe County Health District. If there is a positive result from the Fallon Renown Clinic, that patient would be contacted and then the results would be reported to Churchill County.

This morning the State Dashboard https://nvhealthresponse.nv.gov/ was reporting Churchill had 12 positive cases of COVID-19. Barbee explained that Churchill has only had seven positive cases of the COVID-19 and the extra five positive results were actually antibody tests that were done by Banner Churchill Community Hospital when they offered the tests to their employees. Those five positives are being reported without including how many tests were given and how many of those tests were negative.

“They don’t report the negatives. It could have taken 200 to get the five positives, the way they put it in, they’re reporting a 100% positive rate. So even if it were appropriate to report the five, which it’s not, it’s still flawed data because the way it’s being reported.”

On May 21st, Governor Sisolak said on Twitter, that “Nevada’s COVID-19 dashboard…does not mix viral and antibody tests. The data on Nevada’s site includes only viral testing.” He also referenced a story in “The Atlantic” magazine that examined the way states and the CDC (Centers for Disease Control and Prevention) are reporting testing for COVID-19. https://www.theatlantic.com/health/archive/2020/05/cdc-and-states-are-misreporting-covid-19-test-data-pennsylvania-georgia-texas/611935/

“I got angry as soon as I pulled up their dashboard that they say is absolutely accurate after I’ve told them numerous times,” said Barbee, “after I’ve told them they’re counting antibody tests as positives even though their dashboard says they’re only reporting PCR tests.” The PCR (Polymerase Chain Reaction) tests for active COVID-19 virus alive in a patient at a given point in time, and according to Barbee, give “a direct confirmation of the COVID-19 that we’re dealing with.”

Barbee is also in regular contact with J.J. Goicoechea and the other members of the Sisolak’s LEAD team, the Local Empowerment Advisory Panel, tasked with implementing the phased re-opening of the state.

At the time this story was posted, the state dashboard had been updated to reflect six positive cases in Churchill County and one death.

Sisolak will hold a press conference to discuss the next phase of Nevada’s reopening plan tomorrow, Tuesday, May 26th at 5:30 p.m. The press conference will be streamed online on the www.leg.stat.nv.us website.

Jon Floto 2020-05-26, 06:31 AM Good article Rachel. Getting clean, unbiased research is extremely difficult. As the article points out, a positive antibody test really means nothing unless the test can be more specific, and basing decisions on inaccurate data is just guesswork. Open up Nevada!

Cantaloupe Festival Cancelled due to COVID