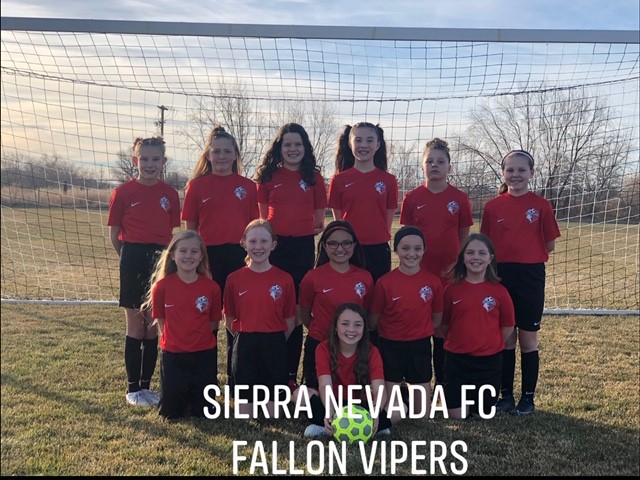 “It’s not about how big you are, but about how big you play.” – motto of the Fallon Vipers by Rachel Dahl -- The Fallon Vipers, a U11 girls soccer team new to Fallon, was started last fall by Miguel Orduña. As a former coach at the high school here in Fallon, Orduña realized that a program to teach and nurture the fundamentals of soccer is greatly needed in the community. “One of our frustrations as a coaching staff was, we were finding the kids were missing a lot of the fundamentals, from simple passing to how to receive the ball; really strong fundamentals that would make us competitive as a community.” Orduña said that in looking at the community the football program has an amazing program because “they start young and they’ve had a lot of success and they dominate.” He said he sees the same with softball and baseball, “the kids start playing when they’re really young and they all  stay together for years. When you look at soccer, you really don’t have the time to do a lot in just two months.” And so, he started the Fallon Youth Sport Association to offer year-round soccer. There are currently 14 girls playing with the Vipers, and Orduña says his goal is to find more girls for a U10 and a U9 team. “We started this last year and now we have a group of six who are returning players and then we added another seven players for this season,” he said. “Our goal is to give the opportunity to girls of all ages and backgrounds to have an outlet, a lot of girls love this sport and they want to learn more about this sport” The Vipers are part of the Sierra Nevada Fútbol Club which Orduña says has been amazing to work with. According to Orduña, getting organized and started with youth sports takes a lot of time and a lot of paperwork. Sierra Nevada FC has been great to work with. “One of the most amazing things they offer is they want to help people coach,” he said. “The method we use and the Sierra Nevada FC has adopted is not based off drills, our philosophy and method that we use to coach is we want these young girls to be able to thinkers; ‘where am I going to go, how am I going to move,’ it is a totally different approach, very cognitive and really engages them.” Our goal is to transition from Sierra Nevada FC to our very own club, the process has begun and my goal is to well establish in a year which will be Fallon United FC. Sierra Nevada Fc has been a tremendous help to us to get things organized and establish. Recently the Vipers played a team out of Reno Nevada United Club that has dominated the league. “Although the girls lost 8-4, the victories that we took home with us are all the lessons we’re learning,” said Orduña. “We were 3-3 at the half, and it was a bittersweet moment to see the girls lose but to feel proud of themselves for how far they’ve come.” He said it is good to see the girls processing and making adjustments. “When we first started playing, a year ago we were always getting beat more than 10 points,” he said. “At the end of the game the Nevada United  coach told us this was one of the most fun games of the year. Her girls actually had to stop and think about what they needed to do differently to adjust to our girls. Our girls have done so well I am so happy to see the development they have shown over the last few months.” Orduña says the Vipers are looking to add more teams and need more players. “Last year we only played late fall, but this spring we are going to play tournaments with NorCal Premier soccer league as well as GBYSL in the spring and Fall 2020-2021  . If everything goes according to plan, we’ll be able to keep going year-round. I want to be able to learn more and give these girls the best opportunity to go to the next level.” The Vipers are starting the spring season and will be traveling to California to participate with the NorCal premier soccer league and are planning on attending at least five tournaments beginning in February. “We are so excited to play and see different teams,” said Orunda. Anyone interested in joining the club to play spring travel soccer, please contact coach Miguel Orduna at 775-857-9678. The team can be found on Facebook at https://www.facebook.com/Fallon-Sport-Youth-Association-Fallon-United-FC-337983457000353/ and Instagram @FallonVipers       Support local, independent news – contribute to The Fallon Post, your non-profit (501c3) online news source for all things Fallon. Never miss the local news -- read more on The Fallon Post home page.