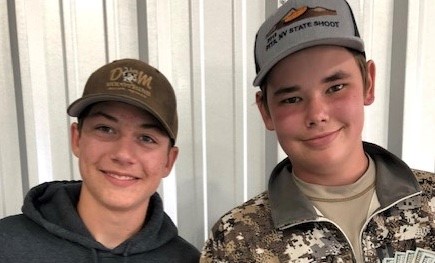 by Susan Weikel -- Pacific International Trap Association (PITA) held their state championship shoot in Winnemucca on May 14th &15th, 2019. This association is open to adults and to qualifying youth from all over the western United States. Fallon youth shooter, Matt Ernst, age 15, brought home the tournament championship in the handicap division. Matt Ernst started shooting as a 4th grader with Lahontan Valley Clay Breakers, which is part of the Nevada Youth Sports Shooting Association. As a youth competitor, Matt was shooting a maximum of 50 targets at one set with a regular field gun. Matt’s mom, Kari, said, “eventually, Matt decided he didn’t want to play football. He just wanted to do this. So, I said, ‘OK, we’ll buy you a new gun, but you have to start competing more.’ Pat Whitten, a local, long time supporter of the youth program, was very instrumental in this move. She was much of his encouragement to start shooting in the PITA shoots.” It was at the PITA Championship in May that Matt shot against a former Olympic qualifier. He shot a 99 in the Handicap division (99 clay targets were shot in a row without a miss). That score gave him the championship for the tournament. Colby Webb, another youth shooter from Fallon scored a 96 and was Short Yardage Champion for the tournament. Early in the tournament, a Calcutta for the next day’s Handicap had been set up. About 70-80 shooters from the tournament were entered into the Calcutta, where bidders bet on the shooter that they think will win the next day’s event. Matt joined into the Calcutta and the bidding began. Longtime local, Fallon shooter, Dave Akins, began bidding against Matt’s mom. They went back and forth for some time, when finally, Kari said, “Ok, you buy him! I have already spent enough on this weekend.” The bidding continued with Dave eventually winning the Calcutta for Matt. The following day as the shooting began, Dave and Kari were out watching the shooters and Dave said to Kari, “Want to buy your son back? How about $3,000?” Kari laughed and said no as Dave chuckled and made the offer again. Kari grins as she says, “You don’t know how much trouble I’ve taken for not buying Matt back that day!” Matt came home from Winnemucca with a PITA State Championship, a 30/70 split on the Calcutta funds, and a great sense of accomplishment. The Akins came home with an extra $5,000 that Kari could have used to cover the cost of the weekend. “It’s a great family sport,” Kari says. “There is so much support from everyone.”       Never miss a meeting or community event – keep an eye on the community calendar at https://www.thefallonpost.org/events/ If you like what we’re doing, please support our effort to provide local, independent news and contribute to The Fallon Post, your online news source for all things Fallon.